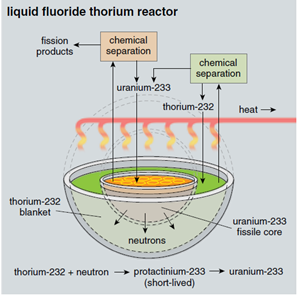 It is considered by many to be one of the most favourable configurations for facilitating the thorium cycle and has become iconic in many discussions of molten salt reactors. Usually the name LFTR is used for a design that includes two separate molten salt cycles that are combined in a single reactor. The first is the core fluid, the second is called the ‘blanket’. Both contain a different mixture of molten salts with either uranium (core) or thorium (blanket) as its key component. This design is also called a ‘two fluid LFTR’.

In this two fluid LFTR , the uranium in the core serves to generate heat for electricity generation, but also delivers the neutrons that turn the thorium in the blanket into new uranium. This happens when the uranium in the core fissions and releases neutrons that are absorbed by the thorium nuclei in the blanket. The thorium then decays (=transforms) into new fissile uranium. This new uranium is chemically separated and transported to the core, and the process starts all over again.

Because the fuel is liquid, it is possible to keep an optimized mixture at all times. The liquid state makes it easy to separate out useful, as well as unwanted by-products. This is an important advantage over solid fuel, which is difficult to manipulate once inside the reactor. Solid fuel ‘traps’ unwanted fission by-products inside its structure.

Throughout this site, we prefer to use the term ‘thorium MSR’ as it designates the whole family of possible molten salt reactor designs and the use of thorium, a family of which the LFTR is a member. Some authors, most notably Hargraves, use the term LFTR in the generic sense in which we use the term thorium MSR.