The nuclear waste that is being produced by traditional nuclear power plants has to be stored in a contained location for many tens of thousands of years (Genyk, 2013). To many, this is the most compelling argument against nuclear energy.

However, there is a marked difference between the traditional solid uranium fuel power generation process and the liquid thorium fluoride process. The radiotoxicity of almost all of the hazardous waste produced by the liquid thorium fluoride process, will be reduced to safe levels in a much shorter time frame. Within 300 years radiotoxicity levels will fall with a factor of 10.000 to levels lower than uranium ore (see graph). The difference between the two cycles will be discussed in more detail in the following sections (Hargraves & Moir, 2010, pp. 309, 311), (Juhasz, et al., 2009, p. 4). 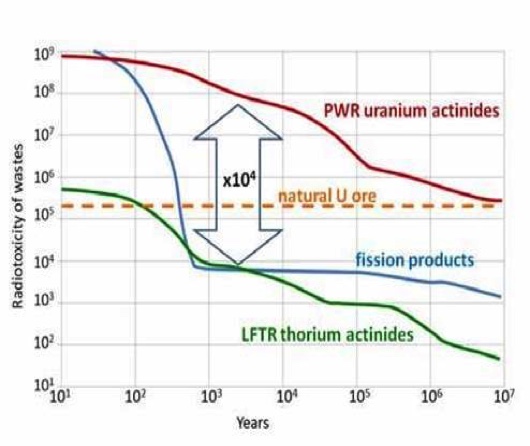 The most common reactor type in operation worldwide is called the Light Water Reactor (LWR). The uranium used in light water reactors is enriched, meaning that it contains about 4% 235U and 96% 238U. Most of this 238U cannot be used by the light water reactor and is left over after the fuel has been used. A small percentage of the 238U gets transmuted into fissile plutonium, and even though the percentage is small, after a 3-year operating cycle this small percentage supplies about 30% if the fission power. In principle, 238U does contain roughly the same amount of energy as 235U, but the energy contents of 238U can only be utilized with a different type of reactor called a “fast reactor”, a technology that generally lacks sufficient policy support in the western world. The use of light water reactor however, without the availability of fast reactors, implies the present nuclear technology only uses a fraction of the energy contents of the natural uranium, and the fuel cycle is not closed.

Another reason why the solid fuel-based technology of light water reactors is not optimally suited to burn all its fuel, is the build-up of counter-productive fission by-products within the fuel rod, such as the gas xenon. Xenon-135 has a great propensity for absorbing free neutrons, which disrupts the chain reaction of the fission process, because neutrons that are absorbed will not hit the nuclei of other atoms to sustain the nuclear chain reaction. The image below (used with permission of Flibe Energy) shows the composition of Spent Nuclear Fuel (SNF) at the end of the nuclear fuel cycle of about 3 years in a light water reactor. 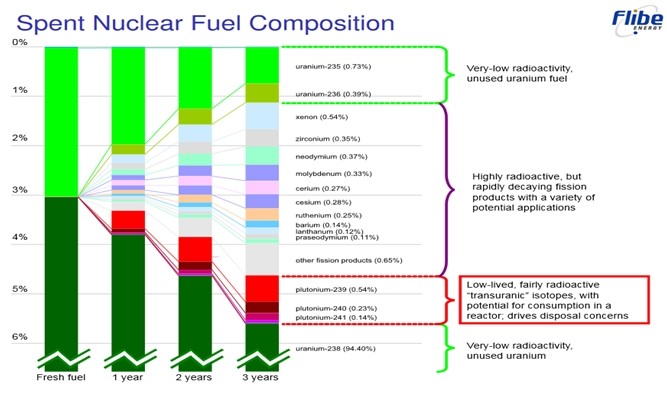 Used fuel rods consist mostly of unchanged uranium (95%), the remainder consisting of a mixture of fission products and transuranic elements such as plutonium, americium, neptunium and curium, that have been forming inside the fuel rods. After reprocessing, in which the U and Pu are extracted, the remainder needs safe storage for tens of thousands of years (Hargraves & Moir, 2010, p. 305).

While solid fuel rods have to be removed due to radiation damage long before all the fuel has been used, the liquid fluoride of an MSR does not suffer from radiation damage. Because of this, the fuel can stay within the reactor until all fissionable material has been used up. The fission products that easily form fluorides can remain in the fuel, most notably the iodine, caesium and strontium. A fraction of noble metals can be captured and removed separately. Transuranics that are formed can also stay within the reactor until they too undergo fission and are burned up. Gaseous fission products can be removed relatively easily during operation. For instance Xenon, a gas that reduces the efficiency of the nuclear reaction (because it absorbs neutrons that could otherwise cause a fission reaction), simply bubbles out of the liquid fuel solution after which it can be safely captured until it decays (LeBlanc, 2009, p. 1645), (Hargraves & Moir, 2010, p. 308), (Hart, 2011, p. 17).

Molten salt reactors are much more efficient at converting fuel into energy than traditional reactors. Unlike an LWR, a thorium MSR burns all its fuel. The same can be said about fast reactors that employ the U-Pu fuel cycle, but MSR’s achieve the same fuel efficiency in the thermal spectrum. The second reason for the higher fuel conversion efficiency is the high operating temperature of the MSR, that allows for a thermal- to electrical energy conversion rate of 45-50% instead of the 30-35% of today’s LWR’s. The high temperatures also open up new possibilities for industrial heat applications.

The figure below gives a comparison between the yearly amounts of raw material needed- and waste production for the traditional uranium/Light Water Reactor (LWR) fuel cycle and the thorium/LFTR fuel cycle to produce the same amount of energy.

The typical uranium/LWR fuel cycle starts with 250 tonnes of natural uranium per year for the production of a GigaWatt-year of electricity. Extracted from this are 35 tonnes of enriched uranium containing 1,15 tonnes of useful 235U. What comes out after use in the reactor is 35 tonnes of spent nuclear fuel (SNF). These 35 tonnes contain 33.4 tonnes or 238U, 0,3 tonnes of 235U, 1 ton of fission by-products and 0,3 tonnes or 300 kg of plutonium. Depending on the country, the SNF may be reprocessed, and the U and Pu retrieved. The remaining fraction consists of fission products and actinides – this is the fraction that is vitrified and will need long term storage. In the thorium fuel cycle, 1 ton of thorium is used in its entirety and what comes out after use in the reactor are a ton of fission products, 83% of which are stable in only 10 years, the other 17% in approximately 300 years. The amount of plutonium in this waste is estimated at 0,01% or 0,0001 tonnes or 100 grams per GigaWatt-year (Juhasz, et al., 2009) (Hargraves & Moir, 2010) (World Nuclear Association, 2012).